As Head of Engineering  and app development lead at Aridhia Informatics, I’m always interested in learning from the community and promoting great content when I stumble across it. So I’d like to draw your attention to the “App Development Roadmap”, a report produced by Oxford Academic Health Science Network (AHSN).  I found it incredibly useful and informative!

Here at Aridhia, we have recently embarked on developing a number of healthcare apps and this report contains some informative observations on many of the major challenges that we are currently encountering.

It’s all too easy to jump in and start developing when you have great ideas, so it is good to see that so much thought has been put into the “pre-development” stage, where it’s important that you consider stakeholders, business justification, commercialisation strategy, and most importantly, the reason for developing the app in the first place.

A key consideration we have come across, which is highlighted in the report and no doubt shared with the majority of mobile app vendors – is working out what is the right balance of devices to support?

Do you sell an app on the premise that it is useable on all internet enabled devices to maximise its appeal to the market? And if so, what effort do you need to put in behind the scenes? Do you buy a wide range of tablets & smartphones in different sizes from multiple vendors to test your app on? Or do you simply buy a representative sample?

Do you sell an app that is only being supported on a select number of devices (e.g. iPad 4 and above, Windows Phone 7 and above, etc.), which greatly reduces your development and testing effort through production, but potentially restricts the adoption of the app in the marketplace?

We’ve tended to approach things based on the former, insomuch that we’ve tested on the most common desktop browsers (versions of browsers that are available on common touch-enabled devices), but also tested on an iPad, iPod Touch, and a smartphone.  This covers a variety of different sized devices, but also allows us to test the touchscreen interactivity from a user experience/usability aspect.

With regard to native vs non-native apps, we’ve taken the route of a non-native solution where we’ve developed web apps that use responsive frameworks that renders the app nicely on a variety of devices, sizes and operating systems.  There are additional challenges to non-native solutions however, depending on how you choose to take your product to market and make it available to end users. In particular, if your primary delivery mechanism is a tablet or mobile device, Apple have an app review process that places a high value on clean, refined, and user-friendly interfaces, so a great deal of consideration must go into the design of any app that is to be sold through the App Store on iTunes.  However, Apple have recently improved their transparency of the app review process by provided guidance on common reasons for app rejections on their website.

It is really good to see such comprehensive guidance on the Medical Device Process in the Oxford AHSN’s report.  Particularly timely for us here at Aridhia as we are in the process of reviewing our design process and software development life cycle, in part due to the conformance vendors now need to consider when developing apps that fall within the boundary of being classified as medical devices. The correct classification of an app as a medical device presents a significant challenge for developers, here at Aridhia we found this EU guidance document to be very useful, as it clearly defines the criteria for the qualification of standalone software as a medical device.

Aridhia currently have a number of apps in development, these include an app that captures data from multiple sclerosis patients, and another that scores patients’ risk of being readmitted to hospital after being discharged. Called PARR-30, the app utilises a risk profiling algorithm developed by Nuffield Trust. Aridhia recently launched our PARR-30 “Community” edition app, which is free for use by any NHS England hospital. Currently, hospitals in England are being fined for each patient that is re-admitted within 30 days of being discharged, which is estimated to be costing the NHS £2.2 billion a year. At its core the app, through Nuffield Trust’s scoring algorithm, contributes to an integrated care process by identifying which patients are most at risk. It has a responsive UI and is designed to work on any internet enabled device, enabling clinicians to use it at the bedside. For example, one consultant wants his clinical administrators to score each patient before his ward round, while another provides a discharge patient triage service, so the app will be very useful as part of their MDT triage meetings. 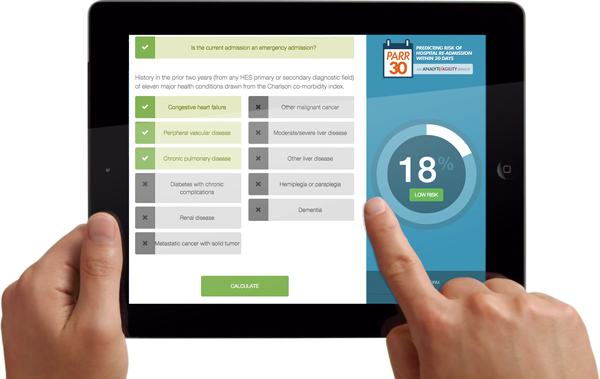 We are also working on a “Trust” edition, the paid version of the app that will carry advanced features such as integration with patient data (within the secure NHS N3 network), trend analysis and score aggregation to aid resource planning.

One point to mention is that if an NHS Trust works with Aridhia to build an app, Aridhia will then seek to offer guidance and support to commercialise and distribute the app, forming a commercial partnership and actively offering a “royalty payment” business model to provide a revenue stream back into the NHS.

With this approach, we find that while creating a commercial business model that is attractive to Aridhia, we are also able to demonstrate how quickly innovation can be diffused into clinical practice while contributing to improving care for patients’ and supporting wealth creation within the NHS.