Diabetes in the UK – What is the Problem?

In 2008, a report by Diabetes UK1 estimated that diabetes accounted for around 10% of NHS expenditure, equating to £9 billion per year, or £1 million every hour. This was double a 2001 estimate (Department of Health, 2001)2, showing the impact of a rising prevalence across the UK. A subsequent report in Diabetic Medicine3 predicts NHS annual spending on diabetes will increase from £9.8 to £16.9 billion over the next 25 years, reaching 17% of the entire NHS budget. The prevalent national diabetes population of Scotland has increased from 103,835 (2%) in 2002 to 258,570 in 2012, representing 5% of the Scottish population (Scottish Diabetes Survey)4.

This epidemic of diabetes in the UK is mirrored around the world as a result of rising obesity rates and increasing longevity. Many countries with rapidly emerging economies such as China, South East Asia, South America and Africa will see the most dramatic rises in diabetes rates over the next few decades, as wealth generation leads to adoption of more sedentary behaviour and poorer, high-fat, Western-style diets. In many Middle Eastern countries, around 1 in 5 of the population already has diabetes (see later example).

The Scottish Diabetes Action Plan5 suggests that “Diabetes has been recognised for at least 10 years as an exemplar long-term condition, both in terms of the growing number of people with type 2 diabetes and in terms of the serious and expensive complications it can bring in its train. Maintaining and improving the quality of diabetes services against a backdrop of increased incidence and prevalence, and the consequent pressure on those services, forms a key challenge facing NHS Scotland”. In its report “Delivering for Health”, NHS Scotland set out a focus on preventive self-care (promoting wellness), and decreasing costly acute care necessitated by illness events6. The Scottish Diabetes Action Plan5 encourages the ‘optimal use of new technology’ to improve diabetes care, specifically “Optimis(ing) sharing of clinical information through the increased use of the NHS Boards’ diabetes databases during routine clinical care”. Timely analytic reporting could help support this and many of the other priorities of this plan – particularly those around patient safety, complication prevention, and emergency admission reduction through early risk stratification and a system to monitor quality improvement. The annual Scottish Diabetes Survey (SDS)4 collects quality performance data from all health care trusts in Scotland through the SCI-diabetes diabetes Informatics platforms. This national annual report informs the diabetes community about care quality and drives care improvements …. but only once a year; access to more timely analytics could further enhance these services and understanding.  See Appendix B for metrics measured in the Scottish Diabetes Survey. In England, the national diabetes audit serves a similar purpose but suffers from a lack of uniformity in data collection.

Reporting on diabetes prevalence, complication rates and care quality is essential to inform the government, health sector, Non-Government Organisations (NGOs) and the public at large, and allows appropriate resource allocation and policy directive. Within the UK, care quality is often mapped against quality targets from best practice guidelines such as:

What are the Impact and Cost Savings of Better Informed Decisions using Data Reporting for Diabetes Care?

In Scotland, the development of a diabetes disease registry (SCI-diabetes) and regular data reporting around quality measures has been widely cited as an example of international best practice. SCI-diabetes, which started as a research database in NHS Tayside, has been rolled out and developed throughout Scotland. Since implementation, dramatic improvements have been reported in achievement of quality outcomes target such as regular monitoring of HbA1c, timely foot screening and eye screening, measurement of HbA1C, ACR, blood pressure, cholesterol (Figure 1). In addition, diabetes complication rates have reduced significantly. Schofield et al12 demonstrated a reduction in diabetes amputation, and Vallance et al13 a reduction of retinopathy requiring laser treatment over the period of informatics implementation and data usage (Figures 2 and 3). This has the potential to translate into massive long-term cost savings for the NHS through the prevention of costly hospital admissions and complications care. Figure 1: Improved Recording of Key Biomedical Markers; Scottish Diabetes Survey 2002-2007. (Data recorded within the previous 15 months) 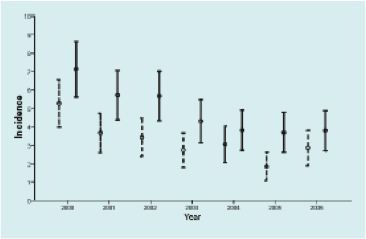 This figure was taken from an original paper “Decreasing amputation rates in patients with Diabetes- a population-based study” by Schofield et al10, demonstrating a 40% reduction in diabetes-related amputations between 2000 and 2009- following the introduction of the SCI-diabetes informatics platform. Incidence of adjusted total amputations with 95% confidence intervals (solid lines) and incidence of adjusted major amputations with 95% confidence intervals (dashed lines) per 1000 patients with diabetes. Incidence adjusted for age and sex. Figure 2B: Contains the amputation and eye laser figures from above combined into one graph. 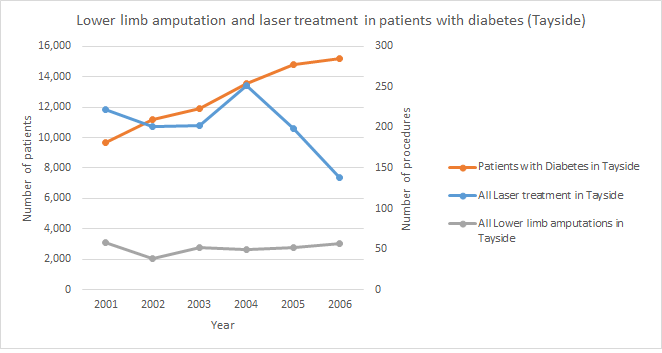 Figure 3: From an original paper “Diabetic Retinopathy; More Patients, Less Laser; A longitudinal population-based study in Tayside, Scotland” by Vallance et al13, demonstrates a 43% reduction in macular laser therapy between 2001 and 2006 (p,0.03). Both graphs show the trends in laser treatment during 2001-2006, for Type 1 and Type 2 diabetes.

The Kuwait Scotland e-Health Innovation Network was formed in 2010 to improve care of chronic disease, with diabetes as an exemplar. Kuwait’s adult population has the sixth highest prevalence of diabetes in the world, affecting approximately 24% of the population. Informatics may be part of the solution to improve care. Aridhia built an informatics disease registry platform for primary health care clinics in Kuwait. The Kuwait Health Network (KHN) informatics platform was piloted in four primary health care clinics in Kuwait capital region. Diabetes care data was collated through KHN and care-mapped against the standard of care dictated by the Kuwait Standard and Clinical Guidelines. Regular semi-automated reports of diabetes prevalence, complication rates and care quality were created on a quarterly basis to inform individual clinics about their performance, in addition to a large annual survey. These reports were also be used by Ministry of Health and wider national bodies to decide on care priorities and resource allocation.

Data Examples from the Kuwait Health Network – Working Towards a Solution

Two versions of the report can be generated:

In addition to giving population and disease profiling, these reports also allow comparisons between different clinics and against the national averages for care parameters.

Here we show further examples of population and disease profiling that is based on anonymised data from the Kuwait Health Network. Example descriptive summaries of the diabetes population: 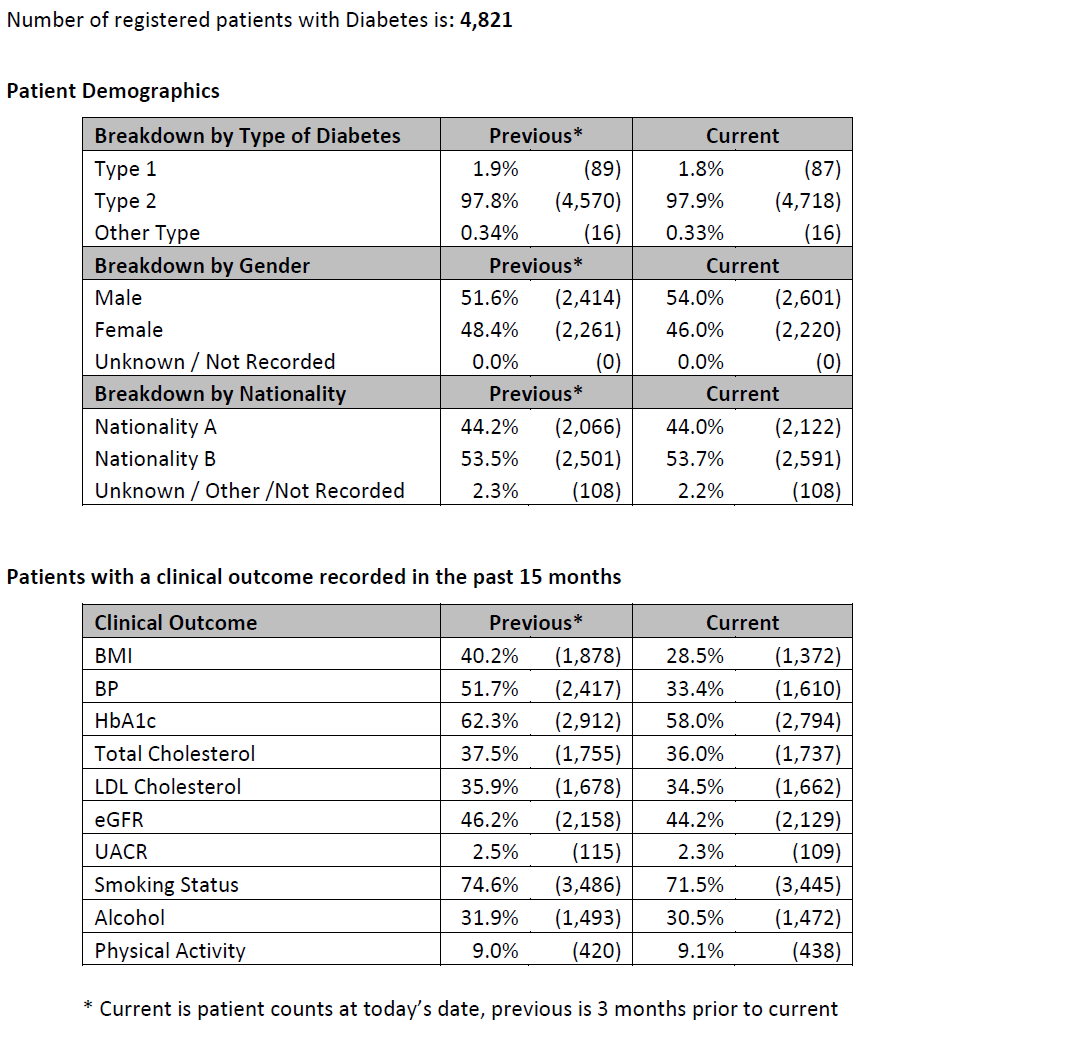 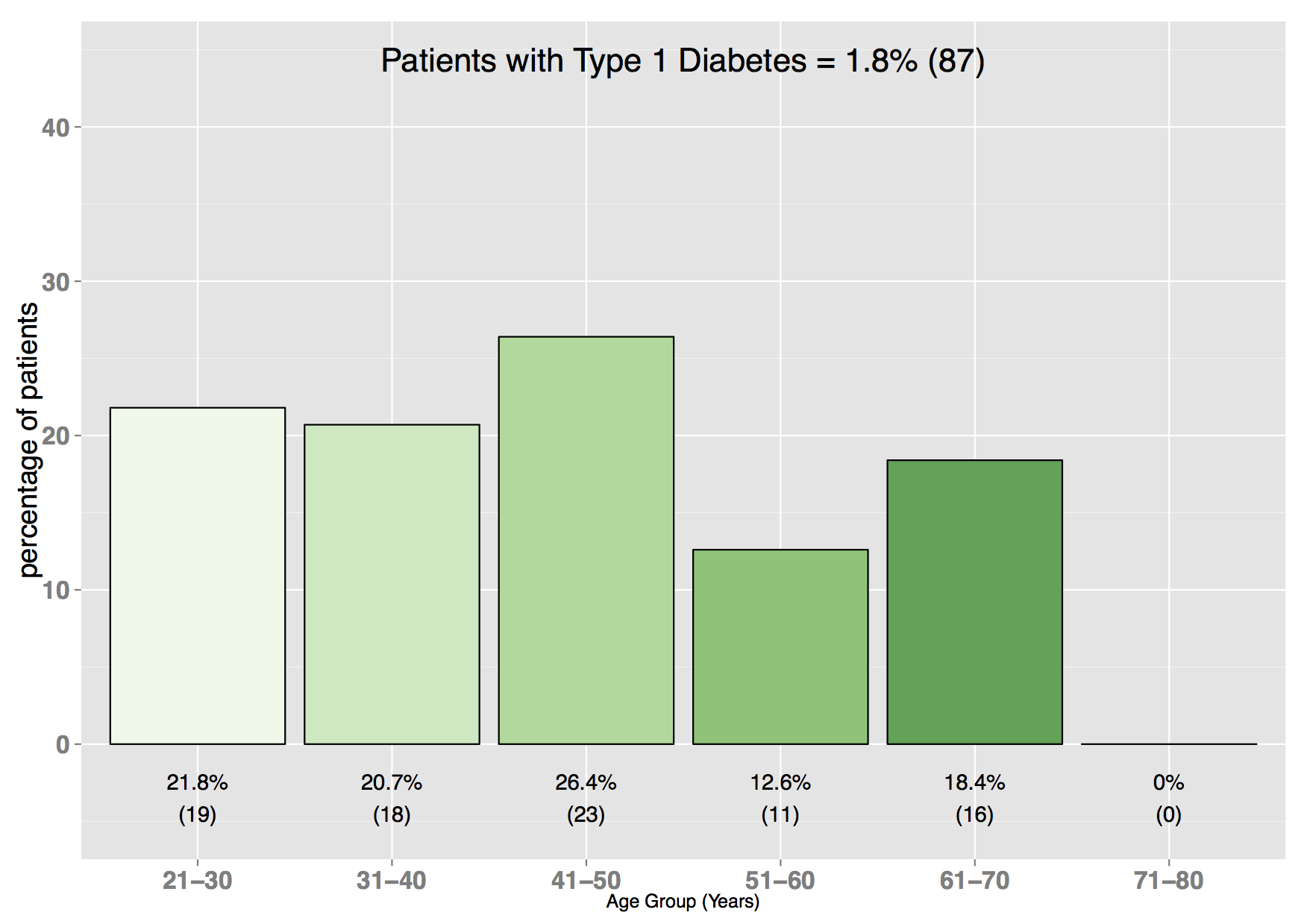 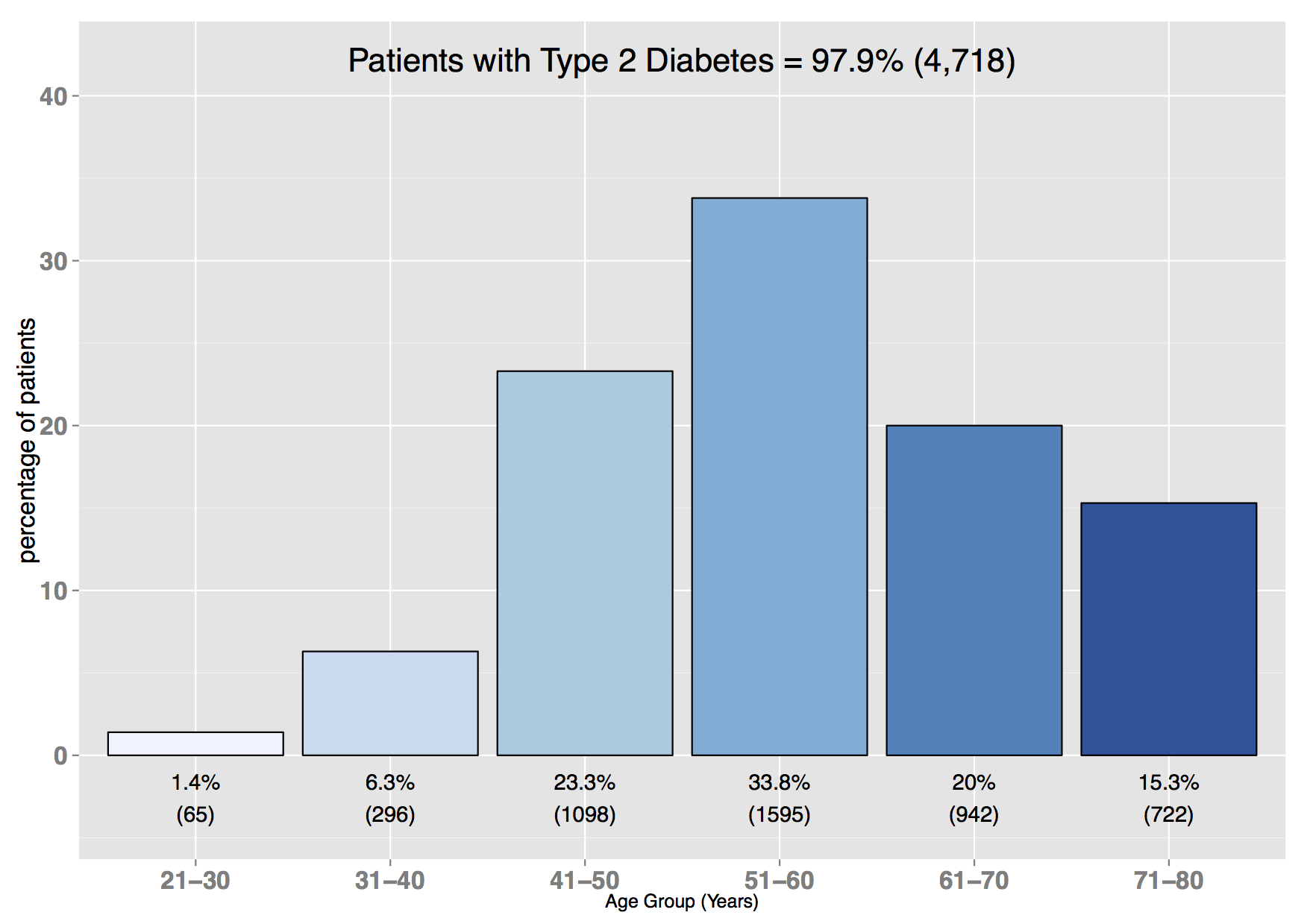 Example plot showing % of patients with a BMI recorded (within last 15 months), split by BMI categories: 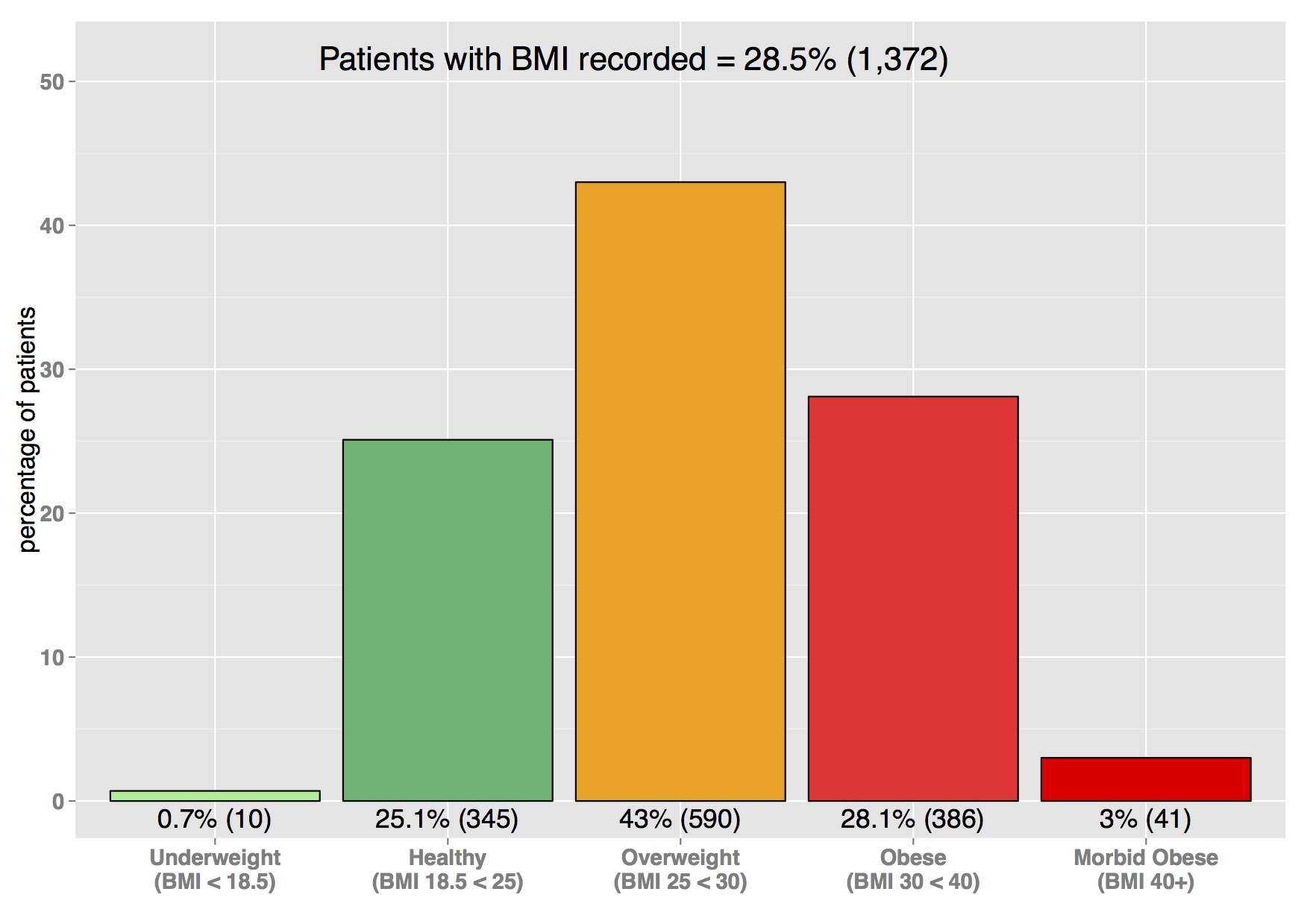 Example: HbA1C (a long-term measure of blood sugar control) should be recorded on all patients at around six-monthly intervals. International guidelines suggest a target of around 7% (53mmol/mol) to reduce the risk of diabetes complications. Example plot showing % of patients with HbA1C recorded (within the last 15 months) and the comparison to target. (Note: Kuwait wanted to understand the breakdown in the very high bands): 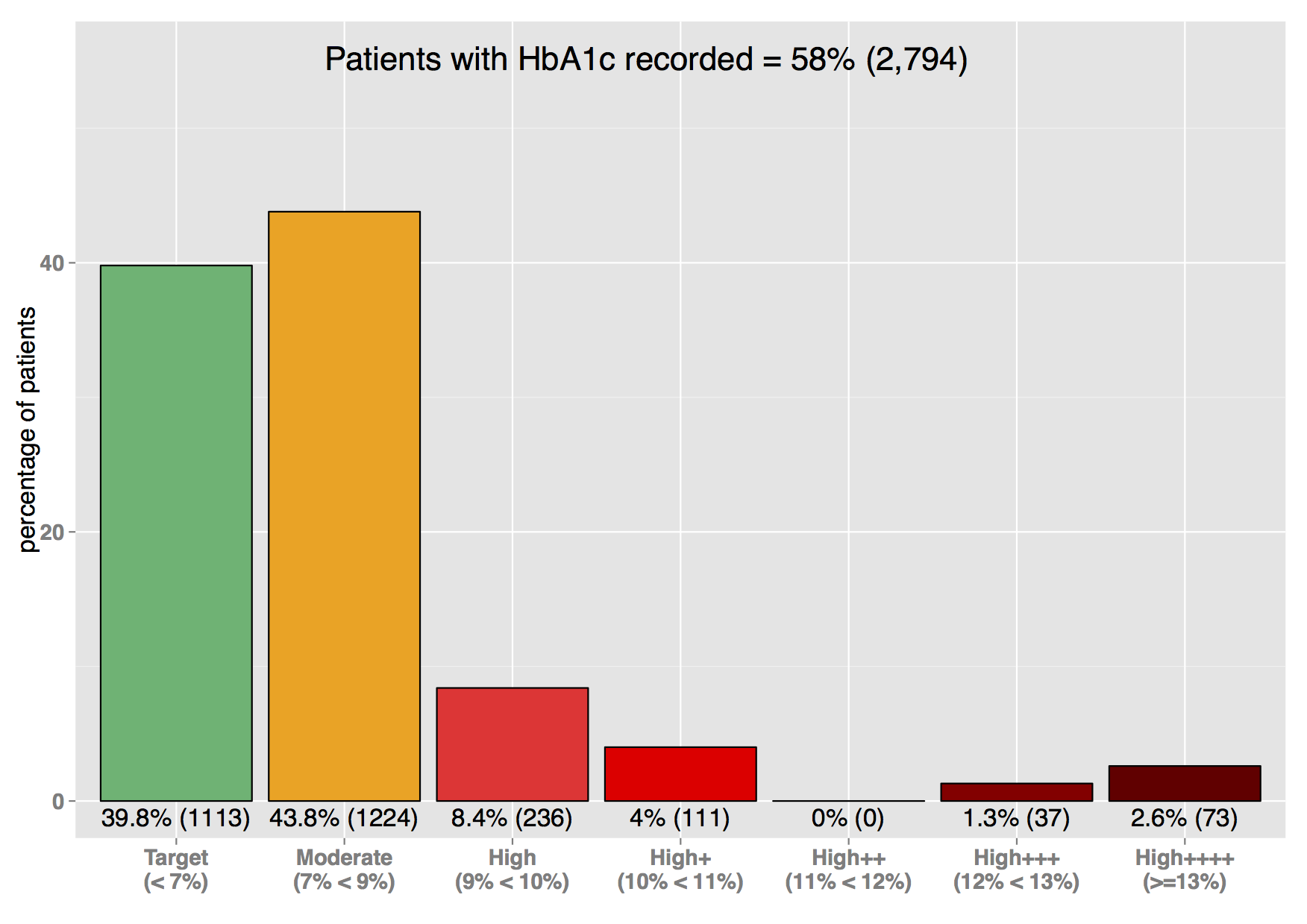 Changes in parameters over time can be mapped using run charts; this is a useful tool for assessing quality improvement. The following charts show the different HbA1C categories over time. The dotted line represents the median based on the most recent 15 data points for each chart. 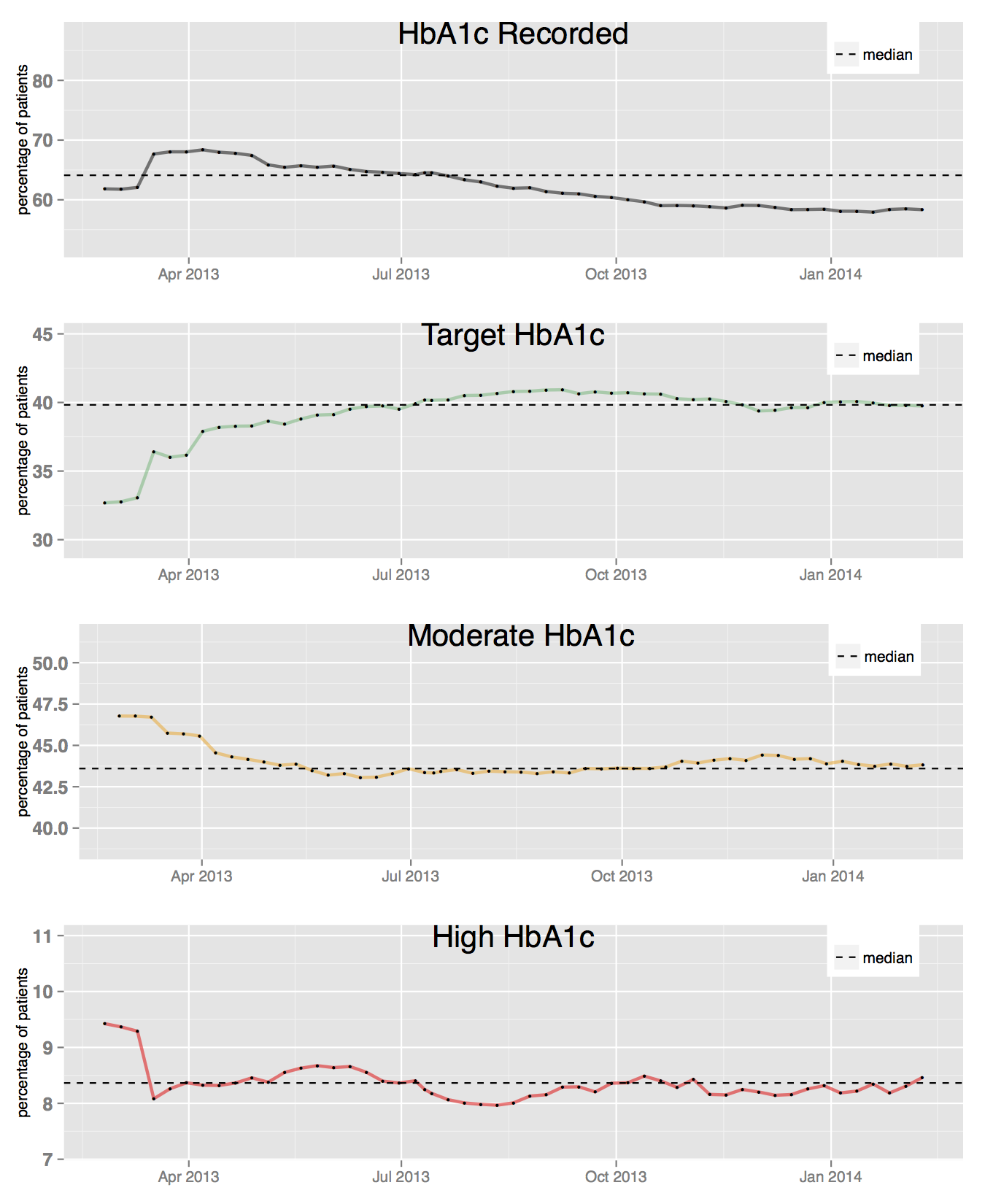 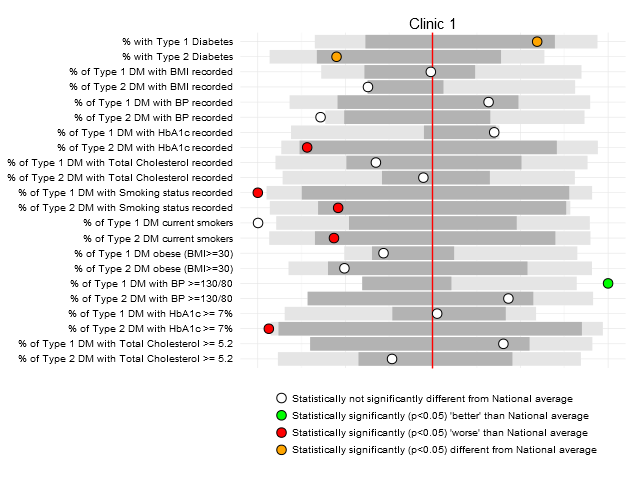 A useful link explaining how to interpret a spine chart can be found here:

The clear display of data in an appropriate format can help readers to quickly assimilate large amount of information. Options for data display may include bar graphs,line graphs, spine charts, and GIS/map visualisations. These can be combined into an auto-generated report as shown. Aridhia has developed scripts which will automatically calculate the key quality performance indicators (QPIs) for diabetes care using any dataset containing the appropriate fields. These scripts also produce a report (pdf) containing all these QPIs. The generation of these reports can be as frequent as data is refreshed, for example, daily or as required for team meetings, through to national reports (weekly, monthly, quarterly, yearly as required). Extracting a data set from a network of siloed data sources / systems can be complex, but turning that data into something meaningful can be transformational for healthcare. Here we’ve shown an example of a clear message being delivered from a large healthcare data set: this message identifies key parameters that dictate care delivery for chronic disease. Transforming future care provision will require many initiatives of this kind.