Earlier this year, Aridhia introduced RStudio and Jupyter Notebook to the DRE, as Built-in Apps within Workspaces, to give users access to some of the most well-known analytical tools used by data scientists today. Launching this feature allowed data scientists to use these tools out of the box and enabled them to work with the tools that are most familiar to them.

In order to further assist our users with their analysis work, we have now added the ability to use Git from both RStudio and Jupyter Notebook. Git is an open-source version control system that is the most popular tool for version control used by scientists and developers all over the world. It allows people that are working on a project to maintain a clear record of what they did during the project, as well as revert to old versions of their code if needed. It also helps foster collaboration since everything that is committed to the Git repository will be marked with the name of the user responsible, allowing for easy traceability. 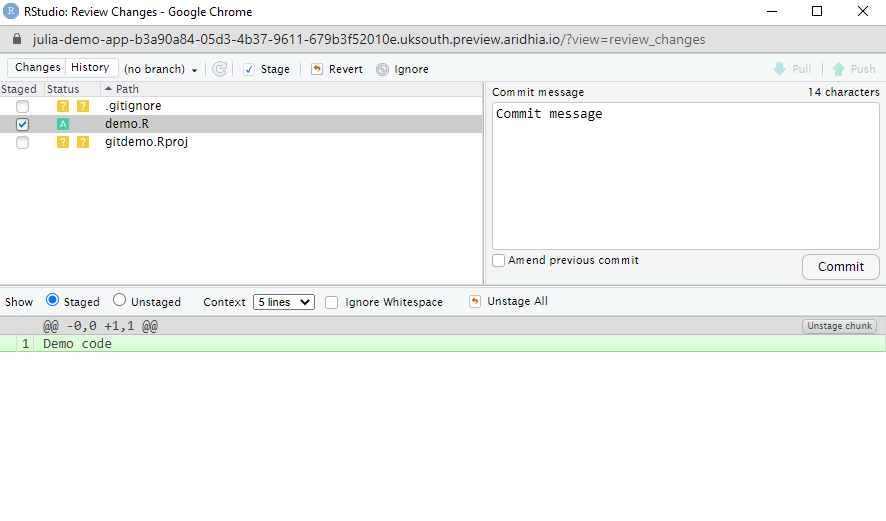 Git being used within the RStudio Built-in App

This feature is a great tool for anyone that wants to keep track of the history of their research, especially if they need to present that research to a regulatory agency or other auditing authority. Here at Aridhia, we strive to make it as easy as possible to maintain the reproducibility of research, especially when multiple people are working together on the same project. Using Git as a version control system gives researchers the freedom to experiment without having to worry about not being able to go back to a stable, working version of their code. Instead, they can explore different theories by branching off from the main code, knowing that they can always revert to an earlier version if they make a mistake or the theory they were exploring didn’t prove worthwhile.

Since the Git repository is kept inside the workspace, all the data committed to it is still kept secure and can only be taken out of a workspace through the Airlock process. In fact, since the git files are stored within a folder in the file system, users can Airlock out the Git repository itself if there is a need to present it outside of a workspace context. Unlike integration with Gitea (covered in our previous blog), the use of Git does not require a virtual desktop, reducing your resource costs.

You can read more about how to use Git inside the workspace here.

This is the latest feature that Aridhia is launching that focuses on versioning, reproducibility and traceability of the work done within a workspace, with much more to come in 2023.

Julia joined Aridhia in 2022 as a Product Owner for Workspaces, having previously worked for another MedTech company. Julia's focus is on the Analytical Tooling side of Workspaces and her role involves defining new tooling features, developing the product roadmap and working with the development team to improve the Analytical Tools within Workspaces.