Risk Stratification: Reducing the Risk of Readmission within 30 Days

It was announced under government plans in 2010 that hospitals will face financial penalties if patients are readmitted as an emergency within 30 days of being discharged. It was revealed on Channel 4 Dispatches in February 2014 that more than 390 million pounds (£390,477,765) has been withheld from English hospital budgets under this readmissions policy since 2011. Following this announcement the PARR-30 predictive model has been developed by the Nuffield Trust to predict which in-patients are at risk of readmission within 30 days of being discharged. Patients may be further classified as being of low, medium or high risk of being readmitted.

Risk Stratification: Reducing the Risk of Readmission Within 30 Days ►

Read all about how Aridhia have implemented this model into a free, easy-to-access app or, try PARR-30 out on our community site to apply the app to your local NHS trust. 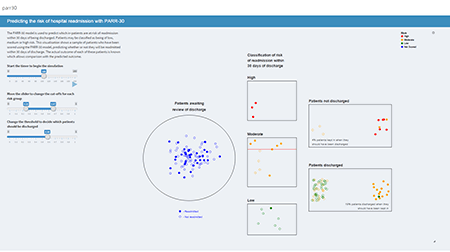 We compared the predicted classifications versus the actual risk score results. We are interested in:

Starting the simulation you can see:

Try running this visualisation to see how the PARR-30 mini-app could process your data. We took inspiration from this great visualisation exploring how risk assessment affects prisoner release in a parole simulation. Take a look here.

Risk Stratification: Reducing the Risk of Readmission within 30 Days ➜