The Use of Run Charts in Health Informatics

What is a run chart?

The following observations from a run chart can be used to characterise behaviour; these are called special causes:

One of the limitations of using the CP line of the entire median on continuous data is that future changes in behaviour can skew the median and so methods used to characterise behaviour can be masked. One way to keep the chart sensitive to change when analysing continuous data is to consider the initial median only, and use this as a baseline against further data. However for this to work, the initial data must be stable. The number of data points to consider for the initial median is dependent on the dataset. Once an initial median baseline (CP line) is established it is frozen, therefore any changes stand out against initial data.

Run charts cannot determine if data is stable [4]. Data on a run chart might look stable, but if plotted on a control chart (for example, a Shewart chart), could reveal special causes. Control charts differ from run charts in that the CP line that is used to distinguish special causes is the mean and not the median. If 50% or more data on a run chart represents the absolute and extreme values then the criteria for detecting a non-random statistical sample cannot be applied. Run charts require judgement and understanding of the data.

The use of run charts in health informatics

Government targets for waiting times in Accident and Emergency (A&E) serve as a driver to improve the operational efficiency of A&E departments. NHS England provide a weekly data snapshot of operational performance that is freely available to the public [5]. In response to public interest, media organisations provide regular analyses of these open data which can serve to drive the news agenda [6]. This reporting is mainly limited to descriptive statistics of the aggregate data, with no statistical inference or consideration of confounders. Greater analytical insight and commentary is available elsewhere, however the associated time lag in producing these reports means that:

In order to respond effectively to the news agenda, stakeholders must have an effective way to visualise and interpret contemporaneous data and tailor this analysis to their needs, for example to reflect changes in national policy or local context.

Run charts are a type of statistical process control method that is often used within healthcare quality improvement initiatives [9]. A run chart was developed using the R console in the AnalytiXagility platform and ggplot2 to automate the process of visualising weekly A&E admission data. Local or national data can be used and timescales can be amended to suit user preference. Tailoring and annotation of the run chart by users enables the assessment of targets and initiatives (either local or national). For the purposes of this post, the run chart has been annotated with a target of 95% adherence to the 4 hour waiting time (black horizontal line); the median or centre point of performance (red horizontal line); the timepoint where a hypothetical waiting time initiative was implemented (blue vertical line); and a hypothetical time period of interest (green transparent area).

The resulting run chart is displayed below: 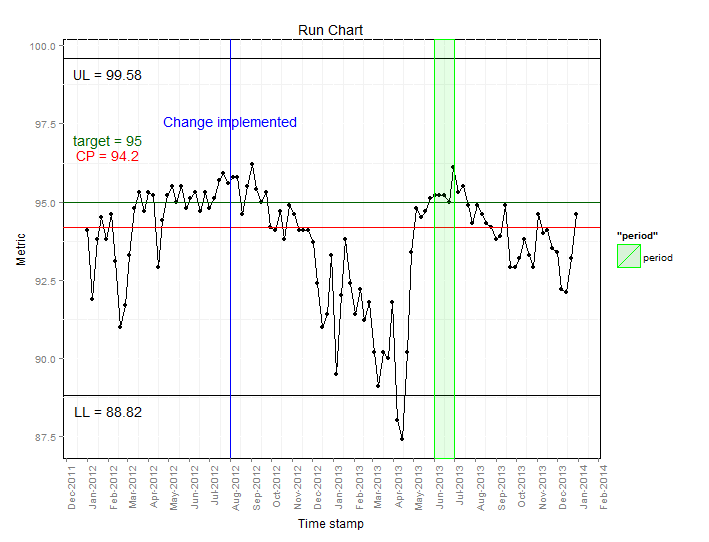 From this we can infer the following:

The NHS Plan published in 2000 stated that “by 2004 no-one should be waiting more than four hours in accident and emergency from arrival to admission, transfer or discharge” [10] but it was subsequently acknowledged that clinical exceptions made this 100% target unachievable. In 2003, an interim milestone was set at 90%, with the aim to achieve a final target of 98% [11]. A combination of additional resources and financial incentives resulted in improvements towards meeting this target, despite a steady rise in attendance rates. In 2002/3, 77% of patients were seen within four hours, improving to 97.7% by 2007 [12,13], although healthcare professionals expressed concerns that patient safety was being put at risk as a result of these waiting times initiatives [10]. Owing to difficulties in sustaining the 98% target, a reduction to 95% was announced in June 2010 with immediate effect [14], resulting in a subsequent drop in the average operational performance to around 95% [8].

Using a run chart we have shown that over the past three years there has been a relatively wide variation in adherence to waiting time targets in A&E in NHS England. We have demonstrated how these data can be collated into an easy to interpret format and how annotation can aid interpretation. Perhaps of greatest value is that fact that this analysis is based on an automated summation of contemporaneous data in a format that is easily interpretable to those with a limited knowledge of statistical techniques. The ever-shifting political and healthcare landscape demonstrates the need for an iterative approach to such analyses and the need to allow users to tailor information to their own requirements.

The Use of Run Charts in Health Informatics ➜