Sibbald accepted the accolade, created for him, in recognition of his contribution to Scotland’s life sciences industry.

Speaking of his award, David said: “To be recognised in front of such an esteemed audience is an exceptional honour. Our work is only just beginning and this award is testament to the vision and energy of everyone who has been involved in helping us move towards a greater understanding of the role data has to play in advancing precision medicine. 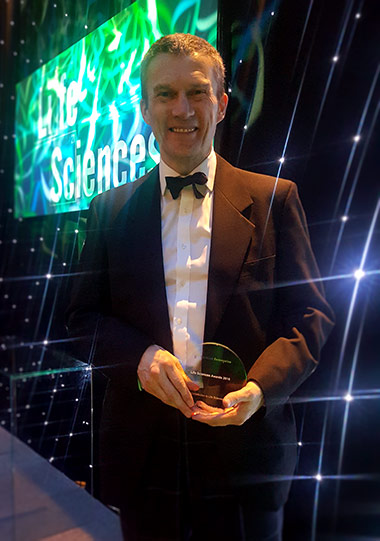 “Collaboration is at the heart of science and I truly feel that this award is not for me, but for the extraordinary life sciences community we have here in Scotland who are so willing to work together for the greater good. It’s quite unique and incredibly powerful.”

Sibbald co-founded Aridhia in 2007, aiming to revolutionise the way data and analytics is used to manage chronic disease and advance precision medicine. Since then, Aridhia has worked with healthcare, academic and life sciences organisations across the world to transform healthcare.

Aridhia has received funding from major initiatives including Innovate UK’s Stratified Medicines Innovation Platform, Horizon 2020 and the Innovative Medicines Initiative along the way.

The company launched its innovative data science platform, AnalytiXagility, in early 2014 and has seen it go from strength to strength. It is the informatics platform underpinning the Stratified Medicine Scotland Innovation Centre, and the newly announced Precision Medicine Catapult.

AnalytiXagility is also supporting a number of major European projects, including EPAD, a £64m collaboration of 36 organisations working towards the prevention of Alzheimer’s dementia, and ADVOCATE, a €6 million oral healthcare innovation project.

Hosted by Scottish Enterprise, the awards aim to encourage colleagues in the life sciences industry to come together to recognise and celebrate the latest innovations within the field.

Professor Anna Dominiczak, Regius Professor of Medicine at the University of Glasgow, and Vice Principal and Head of College of Medical, Veterinary and Life Sciences, has worked closely with David for a number of years.

She said: “From the successes of Aridhia, to his contributions in establishing an industry-led MSc course in Stratified Medicine at the University of Glasgow, and his philanthropic work, David is a visible and much admired advocate for the Scottish life sciences community. He is adept at creating relationships, bringing people together, delivering innovation and creating wealth – a most fitting recipient of this award.”

In 2005, Sibbald founded the Johari Foundation, a social enterprise that provides micro-business support, education scholarships and counselling for 200 children in the slums and remote rural locations of Nairobi, Africa. In 2010, his charitable efforts saw him awarded with an OBE for his work in Scotland and overseas.